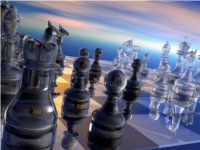 The announcemchess-gameent followed months of negotiations between traditionalists and post-traditionalists (known as the Fianchetto Sinistor), which have been conducted with a degree of secrecy rivaling the Manhattan Project.

The Fianchetto Sinistro had long maintained that chess, in its 600-year-old present form, had not only become irrelevant, but was also exerting an increasingly pernicious influence on society with it sexist, royalist, religionist, and violent concepts. The organization holds that certain post-traditionalist innovations will bring the game into harmony with 20th-century thinking.

Changes in the appearance of the board and pieces will become official concurrently with the revisions in the rules. The prototypes unveiled at today’s news conference elicited gasps and low whistles of appreciation.

Because the old chess sets symbolically promoted interracial strife, the checkerboard of the new boards eschew the traditional black and white in favor of a handsome combination of light chartreuse and deep purple squares. (Post-traditionalists point out that the contrast between dark and chess boardlight still enables the color-perception-challenged to enjoy the game.) It is believed

that the new designer colors may also induce more girls to take an interest in chess, although there has not yet been conclusive research on the subject.

The figures themselves are of a simple style reminiscent of Stanton but with minor alterations. The King and Queen have been replaced by the President and the Spouse, virtually indistinguishable from one another in unisex dress.

The Knight has been supplanted by the Bodyguard. Traditionally, the Knight was represented by a horse, but animal-rights activists had pointed out that the Knight’s move, due to its convoluted nature, was deemed too dangerous for a large animal with thin legs. The new Bodyguard sports a suit and sunglasses.

The Bishop has been displaced by the Journalist, a thin figure in a raincoat.

The Rook or Castle has become the Homeless Shelter, a two-story square figure, and the Pawn has been replaced by the Taxpayer, a stooped figure of indeterminate sex.

The need to update the game became apparent several years ago when a spokesperson for the National Organization of Women pointed out that the Queen’s subordinate position to the King, despite her superior mobility, was a very poor role model for women.

Studies undertaken subsequently under a grant awarded by the National Endowment of the Arts demonstrated that the traditional game of chess influenced children to become aggressive and bellicose.

“Children were being exhorted to ‘crush’, ‘trap’ and ‘repulse’ their opponents.” Ms. Piscopo explained.

Such phrases as mating net and queening square were also found to be deeply offensive to many people.

At the close of the press conference, Ms. Piscopo expressed her appreciation to Hillary Clinton and the leadership of NOW, PETA, NEA, and ACT-UP for their significant contributions to this epochal change in chess and its rules. She noted that next year her organization will begin discussions with the American Crossword Society.